Victor Porter, Brock Area HSE Manager in Oklahoma, was recently given high praise and big complements from one of our customers in the Oklahoma area:

“I have worked with Victor Porter for around 10 years in the refining industry. Victor is a true safety professional in everything he does from his relationships with his crews to the effort he puts into his daily tasks. I have always been able to depend on Victor completing tasks on time and helping to grow his teams from a safety and health standpoint. I appreciate the follow through he has for developing and meeting targets. Victor has also become a strong mentor to new safety professionals in the industry and is always looking to improve himself and those around him. I look forward to many more years working with him and continuing to see where his efforts take him in the industry.”

Thank you Victor, for all of your dedication, hard work and safety professionalism that you bring to this company. Your Bsafe and Bbest spirit obviously shines through and you are truly appreciated!

Keep up the great work! 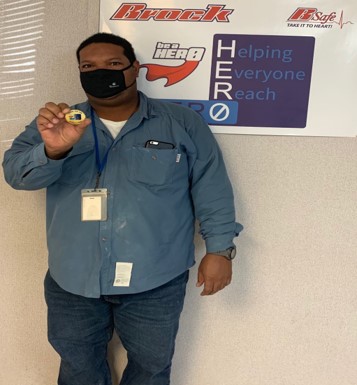 On September 9, Damian Williams was working on a scaffold installing plastic for a containment when he noticed a broken conduit with exposed electrical wires. The weight of the conduit had cut into the outer layer of the electrical wires. Worried about whether or not the wires had power running through them, Damian came down from the scaffold and immediately notified his supervisor. Facility operations went out to check the area and discovered the wire did have power running through it. The job was shut down until further notice. Thank you Damian for taking safety to heart and preventing injury to yourself and others who may have come across the wire later! 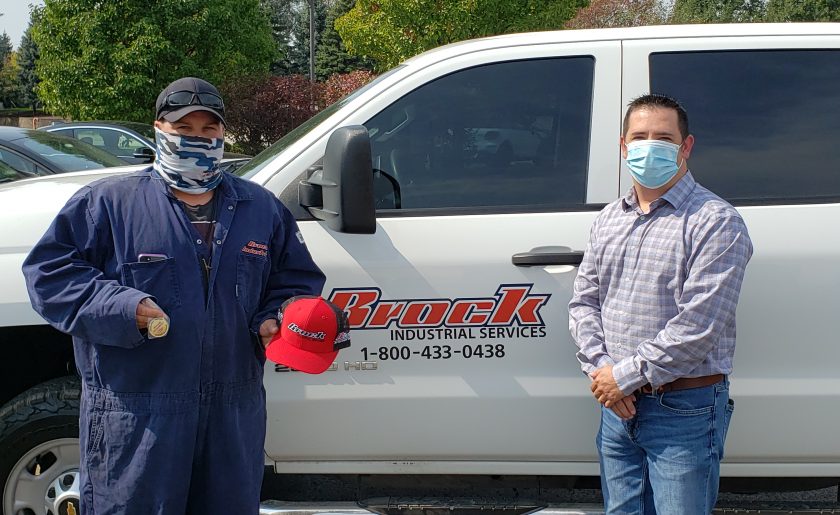 During the night shift of an FCC turnaround on a customers site, a Brock Industrial Services Carpenter crew entered the Regenerator interior to perform a scaffold modification. Upon entering, the workers noticed that something was not quite right with the scaffold. It seemed to be sagging or dipping in the middle, and believing that there could be a structural issue, they decided to descend to the base of the scaffold to inspect it. The base of the scaffold is set up on swivel screwjacks that are used as a means of levelling the scaffold and aiding in the weight dispersal, which are then setup on and nailed to “mudsills” (in this case, 4’ scaffold grade planks), which also assist with the dispersion of the load.

Upon inspection, the Carpenter crew discovered that the screwjacks on two of the main supporting verticals had been disengaged and tied up to the verticals with air hose whips, suspending them above the bottom of the Regenerator. Also, they noted that the planks used for the mudsills were completely removed from the area, which would have required someone to pull the nails that were securing them to the screwjacks.

This modification transferred the weight load that was bearing on these main verticals to the adjacent component and onto the surrounding verticals that were still in contact with the bottom of the Regenerator. With the scaffold having 40 vertical leg lines, and the total weight of the scaffold itself being approximately 70,000lbs., and assuming the live load to be no more than 48,000lbs. (based on a 25p.s.f. standard deck rating and two working levels), a properly based and supported scaffold would be well within the allowable leg load limits. However, since the loads from the improperly modified legs/verticals were on a long span that was improperly supported, the adjacent legs and components were overloaded, which caused that mid section of the scaffold to start sagging. Also, there was a nearby leg that was suspended that was two leg lines away, at the manway, which had the loading properly spread to the adjacent leg lines (an additional leg line was added in for this purpose). However, since these legs were suspended on the opposite side of the leg that was added in to support the suspended leg, and this leg was at the bottom base of a sloped base scaffold, this leg in particular was greatly overloaded and had the potential for failure. If this leg would have failed, a chain reaction could then have occurred, where load would be transferred to adjacent components, leading to potential overloading and failure.

Upon recognition of the potential danger, the Carpenters immediately pulled the scaffold tag, cleared everyone from the work area, and notified their supervisor and safety. An investigation was initiated, and a complete and thorough inspection of the entire scaffold ensued. It was also noted that multiple wood planks, metal scaffold planks, and plywood had also been tampered with and/or removed by someone other than a competent scaffolds builder. This could have also been an issue, since many of these areas also had fire blanket laid down over these holes, which could have resulted in a “trap” for anyone using these decks.

When deemed safe to do so, the Carpenter crew lowered the screwjacks back into place and relieved the deformation that occurred from the overloading, and also repaired the sections of planking and plywood that were removed. Due to the awareness of Daumont and his quick action this was a catch that may have prevented significant injuries, or worse. 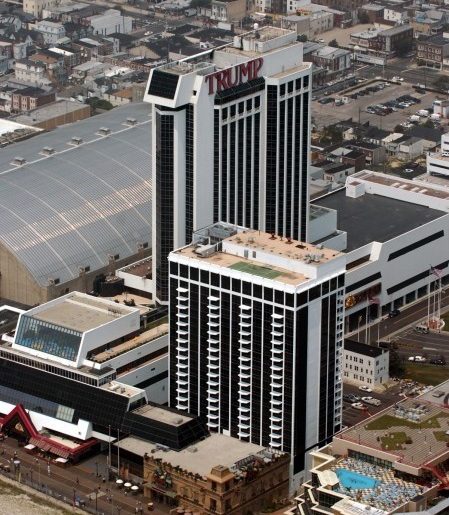 Brock Industrial Services successfully completed the Environmental Remediation of the 37 Story , 1M+ square foot, Trump Casino and Hotel in Atlantic City, NJ, including the Asbestos Abatement of asbestos gaskets, mastic, and flooring. Brock Industrial also completed the Universal Waste disposal of the property, including over 60,000 gallons of waste fuel oil, 4 Above Ground Storage Tanks (ASTs) closures, and over 100,000 other environmental concerns, including 30,000 fluorescent mercury light bulbs that were used throughout the property. The property has been vacant since 2014 and is scheduled for implosion in 2021.