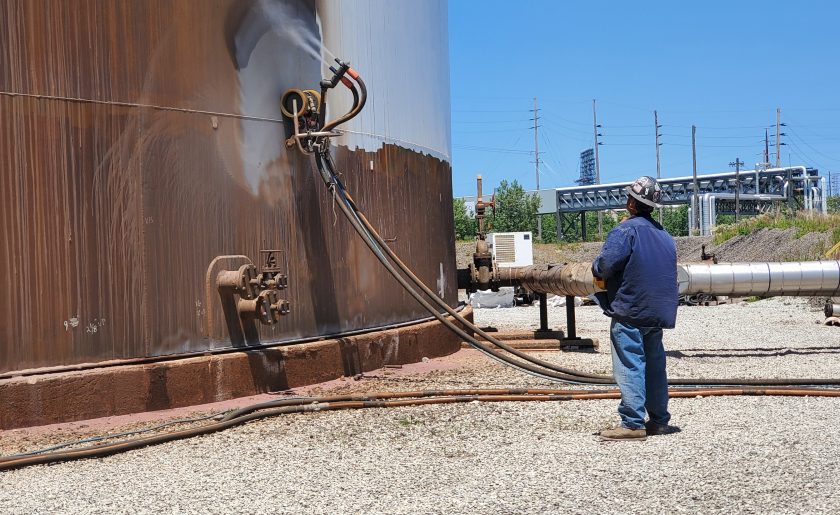 Here at the Brock Group, we aim to provide innovative solutions, while continuing to deliver on the quality service our customers have come to expect. This was no different, when earlier this year, we were approached by a customer to do some abrasive blasting to one of their tanks on a tight schedule. The scope of work included the shell, roof, spiral staircase and roof platform. The tank, which was built in 1981 and had no previous coating applied to the exterior surfaces, had an existing surface condition of Rust Grade D, per the SSPC-VIS 1 Standard.

The customer had two important concerns with this project. First, because the tank was located near busy roadways and commercial businesses, abrasive dust would require containment or suppression. And second, the customer had a tight schedule for completion of the project. Considering these two criteria, the Brock team knew traditional blasting methods would not provide the desired outcome. Therefore, based on their experience with robotic blasting methods, they recommended using a robotic, magnetic crawler blasting technology.

The robotic blaster used for this project, adheres to steel magnetically and moves independently in all directions, including overhead. The robotic crawler holds up to three standard blast nozzles with the blast hoses connected to a bulk blast pot. For this project, the bulk pot was designed with a water injection component which was utilized to meet the dust control requirements. The robot crawler is remotely controlled for operator safety, comfort and productivity.

With a single operator to remotely drive the robotic blaster, the Brock crew only had to perform traditional wet blasting to the cutouts (areas where the robotic reach would be limited, such as stairways, under platforms, and along the top and bottom edges of the shell) with one blaster. An adapter was utilized to hook up the hose for the traditional blast nozzle to the same bulk blast pot used for the robotic blaster in order to address cutouts simultaneously. The robotic blaster on the project was able to reach a higher percentage of the shell surface area than other robotic crawlers, resulting in reduced square footage to clean by traditional methods. The robotic and traditional processes met the blast cleaning requirements of SSPC SP-6, per the customer’s Coating Specification D-118.

Compliant with the D-118 specification, a coat of Epoxy Mastic was applied as a prime coat, followed by an intermediate coat of the same material and a finish coat of High Solids Urethane. All coatings were applied by brush and roller.

The Brock team blasted 450 square feet per hour and 3,600 square feet per day with the robotic blaster for five total days of blasting on the roof and 6 days blasting on the shell. As a result of the increased productivity, the tank was returned to service several days earlier than initially anticipated and at a cost lower than traditional methods would have seen.